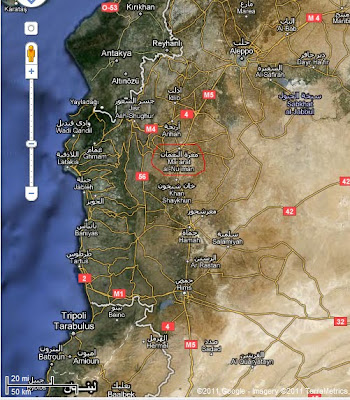 The use of the aircraft came on a day of nationwide rallies against President Bashar al-Assad, as unrest showed no sign of abating despite the harsh crackdown by his authoritarian state.

The helicopters opened fire in a northwestern town after security forces on the ground killed five protesters, said the Syrian Observatory for Human Rights.

"At least five helicopters flew over Maarat al-Numaan and began firing their machineguns to disperse the tens of thousands who marched in the protest," one witness said by telephone.

"People hid in fields, under bridges and in their houses, but the firing continued on the mostly empty streets for hours," said the witness, who gave his name as Nawaf....."
Posted by Tony at 7:45 PM