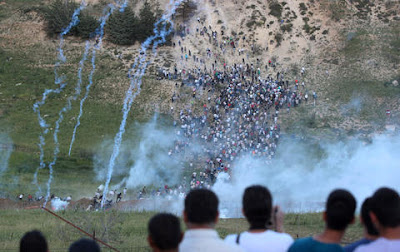 "....Salman Fakhreddin is a political activist and the public relations officer of Al-Marsad, the Arab Center for Human Rights in the Golan (golan-marsad.org). Originally from the occupied Golan Heights town of Majdal Shams, where he still lives today, Fahrideen described to The Electronic Intifada what he saw yesterday, what the real threat to Israel is regarding popular demonstrations, and what message the demonstration sent to residents of the Golan Heights who are resisting the Israeli occupation.

Jillian Kestler-D’Amours: Talk a bit about what happened yesterday near Majdal Shams.

Salman Fakhreddin: Yesterday, hundreds of refugees from Syria — Palestinians and Syrians — marched to the ceasefire line near Majdal Shams in a place called the Valley of Tears. We usually use this place for families [living opposite of the ceasefire line] to meet each other and to speak to each other with loudspeaker on all days of the year. Yesterday, it was a demonstration in memory of the war of ‘67 and the occupation of the Golan, West Bank and Gaza and Sinai. When these people reached the ceasefire line, the Israeli forces were well prepared with snipers. They were there already and they began firing live bullets and they killed and injured hundreds of people. Twenty-three people were killed yesterday.

It is a blood harvest of the Israeli army. I think first they began shooting to kill and during the afternoon and at beginning of the night, they began firing tear gas and rubber bullets. It means that the Israeli army yesterday was standing on its head and thinking with its feet. They dealt with the issue in the opposite of a humanitarian way. They decided to kill people in order to frighten them not to continue with this demonstration because they are afraid of the delegitimization of the state of Israel and the Israeli policy in the international community.

On the other hand, the demonstration yesterday and the demonstration of Nakba Day [on 15 May] is trying to develop a culture of nonviolence in the area, in the struggle against the Israelis, or what’s called the popular resistance. In Israel, they want to stop that because they are afraid it will reach the knowledge of the international community and the internal Israeli community will join this struggle as a peaceful struggle against colonialism and apartheid in this place of the world.

I think the idea was to stop that and because of that, they chose this way: to kill people first and then to shoot them with tear gas....."
Posted by Tony at 4:19 AM