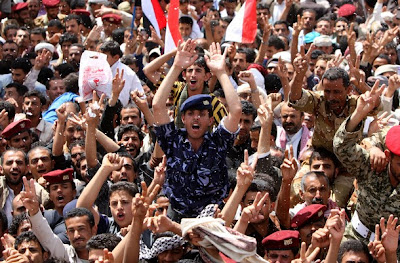 "The uprisings sweeping the Arab world appeared to have won their third victory over authoritarian rule by overthrowing President Ali Abdullah Saleh of Yemen after 33 years in power. He left for Saudi Arabia on Saturday to be treated for injuries received in an explosion in his presidential palace and is unlikely to return.

Thousands of people danced and sang and slaughtered cows in the streets of the capital Sanaa yesterday as news spread that Yemen had joined Tunisia and Egypt in ousting a widely detested leader who had controlled the state for decades. Anti-Saleh demonstrators held up signs saying "Yemen is more beautiful without you" and "Name: A Free Yemen. Date of birth: June 4, 2011"......

.... There are unconfirmed reports that senior government ministers and top officials close to him were trying to board flights out of the country from Sanaa airport.....

It was first announced that a rocket had struck the mosque but there is speculation in Sanaa that it is more likely that such a precisely targeted explosion was the result of a bomb planted by insiders within the regime.

Though President Saleh's presence in hospital in Riyadh decapitates the regime politically, his son Ahmed, commander of the presidential guard, remains in Sanaa, as do two nephews and two half-brothers, also commanders of elite units. They are strong enough to defend themselves, but without President Saleh's presence are unlikely to be able to maintain their grip on government."
Posted by Tony at 6:37 PM