Syrian refugees in Turkey: 'People see the regime is lying. It is falling apart' 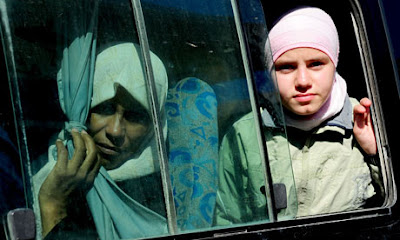 Bloodied but defiant, those who have fled the besieged town of Jisr al-Shughour damn the rule of Bashar al-Assad

"....After five days away from his homeland, Abu Majid is convinced that the four decades of unshakable autocracy he left behind are now steadily unravelling. He is sure that the government's claim that armed locals killed 120 government forces through ambushes and assaults in Jisr al-Shughour over the weekend will soon be proved wrong. He is sure, too, that those who oppose the rule of President Bashar al-Assad now outnumber his supporters. But he says Assad's government is stirring sectarian chaos as it tries to claw back the legitimacy it lost during street demonstrations across the country, which it regularly crushed through violence.

"We never thought in sectarian ways before all this happened," he said. "And now people are talking about Sunnis, Alawites, Shias, Christians. You can say many things about us, but you can't say that Syria was ever like Iraq or Lebanon. This is leading the country into the unknown."

Officials in southern Turkey said that about 2,500 Syrians, many from Jisr al-Shughour, had crossed the border. Despite being told by their hosts not to speak publicly about the uprising, refugees are still willing to talk about the events of last weekend, which Damascus has tried to cast as an armed rebellion that it had no choice but to put down.

"There was a desertion," said Abu Majid. "I saw it with my own eyes. There were a large number of strangers in town on Saturday. I don't know who they were, they were big men, many of them bearded and most in civilian clothes. They started shooting at the people and some of the security forces tried to join us. They were killed – there were many of them killed."

In beds alongside him in Antakiya's government hospital, three other Syrians, also nursing wounds, chimed in. They had all been shot in earlier clashes on 20 May at a village 10 miles south of Jisr al-Shughour...."
Posted by Tony at 9:05 PM