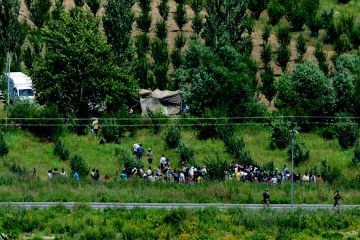 By Khalid Ali
The Independent

"Hundreds of Syrian refugees were stranded in the mountainous woodland bordering Turkey last night as they fled convoys of tanks and troops which were reportedly heading north towards the town of Jisr al-Shughour.

Families carrying bundles of clothes and other belongings arrived at the border fence after travelling on foot or in convoys of pick-up trucks and cars.

They were fleeing the area after the government vowed a tough response to the deaths of 120 members of the security forces at the hands of so-called "armed groups", reported by state television earlier this week.Refugees contacted by phone told The Independent they were escaping from the area because they feared for their lives.....

Details of the killings – which would mark an unprecedented blow to the regime of President Bashar al-Assad – remain thin on the ground. But activists and witnesses said soldiers who had defected were responsible for the deaths of the security men. The number of casualties is unconfirmed. But in a rare admission yesterday, a pro-government newspaper acknowledged that Syrian troops had lost control of large parts of the country's north-west.

Yesterday there were reports that the Syrian army's notorious 4th Division – headed by the President's younger brother, Maher, and previously used to destructive effect in the southern city of Deraa – was heading towards Jisr al-Shughour.....

....The Turkish Prime Minister Recep Tayyip Erdogan said: "We are monitoring developments in Syria with concern. Syria should change its attitude towards civilians and should take its attitude to a more tolerant level. It is out of the question for Turkey to close its doors to refugees coming from Syria." [But Hassan Nasrallah would.]....."
Posted by Tony at 4:02 AM