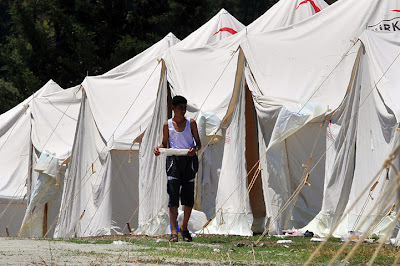 "She may look like the actor Isla Fisher and speak like a Mayfair lady who lunches, but appearances – and words – can be deceptive. As hundreds of refugees fled the Syrian border town Jisr al-Shughour on Thursday, desperate to avoid an expected government clampdown after the killing earlier this week of 120 soldiers, Reem Haddad , the director of Syria's state TV network, gave an interview to the BBC to account for the crowds pouring into Turkey.

Many have relatives in villages just the other side of the border, she said. "A lot of them find it easy to move across because their relatives are there. It's a bit like having a problem in your street, and your mum lives in the next street, so you go and visit your mum for a bit."

As Syria's security and humanitarian crisis escalates, Haddad, who acts as a spokeswoman for the country's information ministry, has become one of the most familiar faces of President Bashar al-Assad's regime, with a talent for insisting on innocent explanations for the brutal government response to the protests.

In this she has drawn comparisons to Muhammad Saeed al-Sahhaf, whose exuberant insistence on behalf of Saddam Hussein's government that the Iraqi army was invincible earned him the nickname Comical Ali before the 2003 allied invasion.

Little is known about Haddad's early career to date, though her father served as Syria's ambassador to East Germany and is said to have modelled Syria's secret police on the Stasi....."
Posted by Tony at 12:45 PM