Surprise, Surprise! I Am Shocked! Will the US really withdraw from Iraq and Afghanistan? 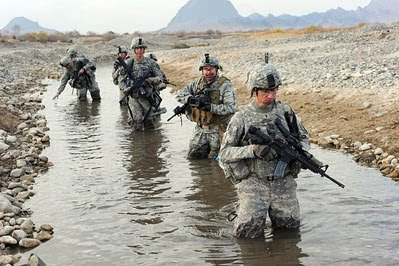 Behind closed doors in the White House and the Pentagon, a battle is raging over the wisdom of a complete exit

"....Like Karzai in Kabul, Nouri al-Maliki's administration in Baghdad is weak, fractious and unloved. It faces a reviving challenge from Iran via Muqtada al-Sadr and his Shia Mahdi army. Key ministries such as defence and interior remained leaderless. And Maliki is far from immune from the Arab spring; renewed anti-government protests over jobs, electricity and corruption are expected this Friday. Little wonder, then, that some Kurdish and Sunni leaders would prefer the Americans to delay their departure, possibly indefinitely. The US says it is willing to "entertain" this idea.

And there's the rub. In Iraq, as in Afghanistan (where despite Karzai's hostile rhetoric, a long-term "strategic partnership" agreement is being negotiated), the prospect of a continuing presence of quasi-permanent US military bases in both countries, lasting far beyond the nominal exit dates, is a very real one. Behind all the talk of withdrawals lies this dirty little secret: the Yanks aren't going home."
Posted by Tony at 3:47 AM