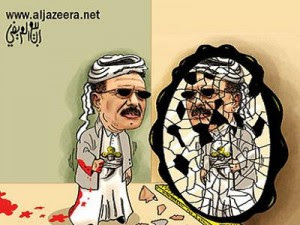 "Ali Abdullah Saleh, the Yemeni president, suffered "extensive" injuries including severe burns in an attack on his Sana'a palace last week, reducing the chances that he will be able to return home after undergoing treatment in Saudi Arabia.

Saleh was said on Monday to be in a stable condition in a military hospital in Riyadh after he was operated on by a Saudi-German medical team for shrapnel wounds to his face, neck and chest.

Aides initially claimed he had suffered only minor injuries, but diplomatic sources estimated that he had received burns to 40% of his body.

Al-Jazeera Arabic TV reported that he would require cosmetic surgery and quoted Saudi medical sources as saying he would need to recuperate for two weeks before returning to the Yemeni captial, a timeframe which looks far too long in the current uncertain and volatile climate....."
Posted by Tony at 12:34 PM