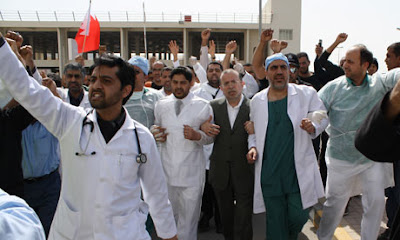 "Scores of Bahraini doctors and nurses who treated injured anti-government protesters have been charged with attempting to topple the kingdom's monarchy.

The 23 doctors and 24 nurses were formally charged on Monday during a closed door hearing in a special security court.

The 47 accused have been in detention since March, when the country declared martial law in order to clamp down on a wave of demonstrations that swept the tiny kingdom earlier this year.

Though the emergency law was lifted last week, Bahraini authorities have warned opposition activists of "consequences" in case of any further challenges to the government.

On Sunday, Bahraini police clashed with Shia marchers at religious processions in villages across the country, the country's opposition al-Wefaq movement and residents said.

Police used tear gas, rubber bullets, sound grenades and birdshot to break up the marches, which were taking place in several Shia villages around Manama, the country's capital, residents and members of al-Wefaq said.......

Bahrain is home to the US Navy's Fifth fleet, and as such is a key ally for that country in the region. Saudi and Emirati forces appear to be set to remain the country indefinitely in order to ensure that the protesters do not achieve their goals."
Posted by Tony at 7:15 AM