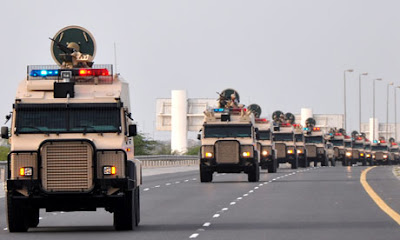 By propping up the Arab monarchies, Saudi Arabia is reverting to its old anti-revolutionary role

"Little did Riyadh know that the most severe strategic blow to its regional influence would come not from Tehran, or Tehran's agents in Baghdad – but Cairo, its closest Arab friend. The ousting of Mubarak did not only mean the loss of a strong ally, but the collapse of the old balance of power. The region could no longer be divided on a Riyadh-Cairo v Tehran-Damascus axis. Revolutions have struck in both camps: in "moderate" Egypt and Tunisia, as in "hardline" Damascus and Tripoli. The principal challenge for the Saudi regime is no longer the influence of Syria, Iran or Hezbollah, but the contagion of revolutions.....

Although the Saudi regime is preoccupied by the Iranian threat, its eye is now focused on Egypt and the Arab revolutions, existing and potential. There is nothing that it dreads more than a return to the 1950s and 60s scenario of Cairo spearheading a revolutionary Arab world against pro-American conservative kingdoms. Riyadh is in the process of reproducing the 1955 Baghdad pact, forged in confrontation with Nasser and his revolutionary officers and bringing together the rulers of Saudi Arabia and Jordan (both unofficially), Pahlavi Iran and royal Iraq, as well as Turkey and Pakistan. Some of the players have been replaced, and nationalism has made way for Islamism, but the structure of the strategic game is the same.

And so is its mightiest weapon: money. In a battle where internal fears coincide with external interests, Riyadh is resuming its old role as the vanguard of a cold war against change."
Posted by Tony at 4:15 AM