Yemen, and the trouble with 'democratic transition' 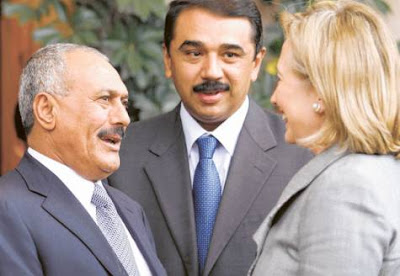 "The US said on Monday that it wants to see an orderly, peaceful and democratic transition of power in Yemen. But, as one tweeter pointed out, that is not quite the same thing as saying it wants a transition to democracy.

The US has always viewed Yemen as a security problem and very little else – a view reinforced by media scares about al-Qaida taking over – but beyond providing military and economic aid it has very little influence on the ground. It is therefore relying on one of the world's least democratic countries, Saudi Arabia, to help manage this "democratic transition".

The Saudis have always been deeply involved in Yemen's politics, though their meddling has often failed miserably. They backed the losing side in the 1960s when Yemenis overthrew the monarchy, and again in 1994 when secessionists took up arms in the south....

Meanwhile, for the young protesters on the streets – singing, dancing and daubing themselves with face paint – these military power plays are anathema and belong in the past. For them, getting rid of Saleh is just the first step towards shaking off the cobwebs and even if the Americans, Saudis and military men are not paying them much attention now, time is firmly on their side. The average age of a Yemeni is just 17."
Posted by Tony at 4:33 AM