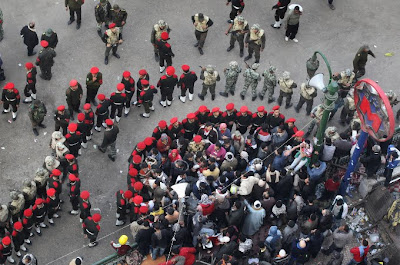 "(Cairo) - Egypt's transition to a democracy that respects the rule of law and human rights is at risk unless the military transition government carries out a number of immediate human rights reforms, Human Rights Watch said today.

"At this critical period of transition, the military should make a clear break with the repressive policies of the past, and this means ending military trials, repealing the emergency law, and laws that restrict freedoms," said Kenneth Roth, executive director of Human Rights Watch, who led the meetings in Cairo for Human Rights Watch. "Egypt has started to try some former officials, but unbroken impunity for the systematic torture of Egyptians over the past decades will only invite reoccurrence of abuse....."
Posted by Tony at 3:34 AM