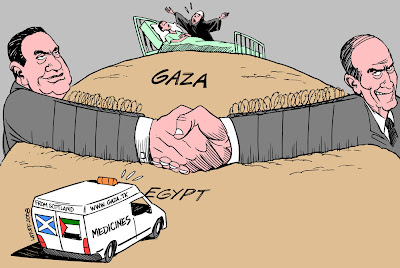 "Last Friday night, after a peaceful, small-scale march north of Cairo in solidarity with the besieged Palestinians of Gaza, Egyptian secret police kidnapped one of the event organisers, Philip Rizk. Philip is an Egyptian-German blogger, film-maker and activist, who had previously lived in Gaza for two years. As I write this, no one has yet received confirmation of his location or had any communication with him.

There are more detailed accounts of what happened on Friday and events since then on various blogs. The family, while desperately worried, have been working with local activists and friends abroad to mobilise a campaign for Philip's release (the Facebook group attracted more than 2,500 members in the first two days).

However, Phil would be the first to point to the fact that what has happened to him is all too common in Mubarak's Egypt. In fact, this "Mafia-style" abduction, and the Palestine focus of Philip's work that made him a target for Egypt's mukhabarat, draws attention to some larger developments in Egypt and the region.

Firstly, it is no coincidence that the Egyptian police chose to clamp down on a display (however modest) of both support for the Palestinians and opposition to Egypt's policies towards the Gaza Strip and Israel. Even before Israel launched its assault on the Palestinians in Gaza, Mubarak was under pressure for helping to maintain the blockade on Gaza as Israel's "siege" ground on. But Egypt became the target of particularly fierce anger once Operation Cast Lead had begun, as reports emerged of possible Egyptian collusion.....

More recently, Turkish prime minister Recep Tayyip Erdogan caused a minor stir when he stormed off stage at Davos after a verbal attack on Israeli President Shimon Peres. Yet the Israeli ambassador in Turkey said "relations would soon be back to business as usual" – an apt choice of phrase, given that "Turkey still has billions of dollars of arms deals with Israel" as well as "a military training arrangement". In fact, the huge trade volume between Israel and Turkey has significantly increased under the current Justice and Development party government.......

Opposition to Mubarak in Egypt is diverse – and at its worst, fragmented and divided – but it has expanded to include concerns such as democratisation, labour rights and opposition to neo-liberalism, as well as Palestine and Iraq. The disparate resistance may not yet have coalesced fully, but protests are increasing in intensity. Between 1998 and 2004, there were more than 1,000 workers' protests, but an estimated 800 strikes and demonstrations in 2006-07 alone.

Hossam al-Hamalawy, a socialist journalist and blogger, believes that increasingly, Egyptians are connecting issues such as education and workers' rights at home with their government's failure to support the Palestinians. In 2000, he notes, a slogan of the radical left was "The road to Jerusalem passes through the Arab capitals", while in 2002 angry protests against Israeli attacks in the West Bank resounded with the cry "Hosni Mubarak is like Sharon, same shape, same colour"......."
Posted by Tony at 3:47 AM