Gaza 2009: Culture of resistance vs. defeat 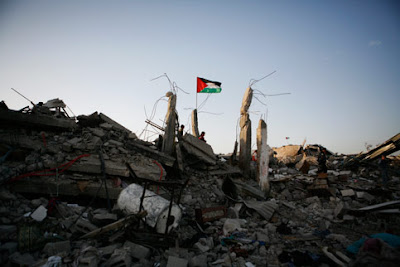 "The ongoing bloodletting in the Gaza Strip and the ability of the Palestinian people to creatively resist the might of the world's fourth strongest army is being hotly debated by Palestinian political forces. The latest genocidal war which lasted 22 days, and in which apartheid Israel used F-16s, Apache helicopters, Merkava tanks and conventional and non-conventional weapons against the population, have raised many serious questions about the concept of resistance and whether the outcome of the war can, or cannot, be considered a victory for the Palestinian people. The same kind of questions were raised in 2006 when apartheid Israel launched its war against the Lebanese people and brutally killed more than 1,200 Lebanese.

At the beginning of the Gaza war, we were told by certain sectors of the Palestinian political leadership that "the two sides are to blame: Hamas and Israel" and that "Hamas must stop the launching of the rockets from Gaza." Resistance in all its forms, violent and otherwise, was considered, by these same people, "futile." Now that there are fewer bombs raining down on Gaza, the conflict focuses on whether the outcome of the war was one of victory or defeat.....

The new, much-needed program, however, must make the necessary link between all Palestinian struggles: the occupation of Gaza and the West Bank, Israel's ethnically-based discrimination and rights violations of more than one million Palestinian citizens, and the 1948 externally displaced refugees. Gaza 2009 was not a defeat but a victory, because in Gaza the Israelis shot the two-state solution in the head; it is a victory achieved with the blood of those children, men and women who sacrificed their lives so that we could live and continue to resist, not surrender. Those Palestinians that are mourning the demise of the two-prison solution are out of step with new facts on the ground: there can be no going back to fake solutions and negotiations; it is time for a final push to real freedom and statehood. They can join other Palestinians, and internationals, in their demand for a secular, democratic state in Mandate Palestine with equality for all or they can walk into the dustbin of history."
Posted by Tony at 6:01 AM