OBAMA’S CURE MAY BE WORSE THAN THE AILMENT 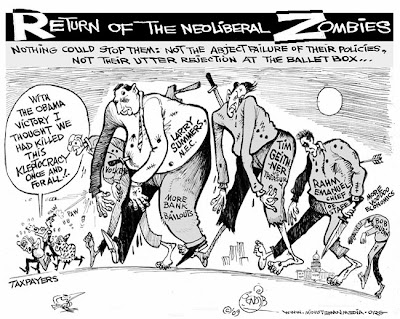 Click on cartoon by Khalil Bendib to enlarge.
Paris February 09, 2009
By Eric Margolis

"......As one involved for nearly 50 years in business and investments, my advice to the young president is to tell Americans to patiently accept a long period of hardship and hangover, tighten their belts, and start living within their means. After eight years of untruths from the Bush administration, many Americans are ready to hear the facts, however unpleasant.

While aiding the financial system, the government should investigate all the bankers, realtors, money managers and financial alchemists who created America’s bubble economy of debt. Fraudster Bernie Madoff was not alone. Time for handcuffs, not golden handshakes.

The best way to stimulate the ailing economy is to cut taxes. Let people decide how to spend their money. Washington’s plans for new bridges and day care centers may win votes, but won’t revive the economy. Japan tried this and it failed. The US needs productive industrial investments.

Obama should cut government spending and half the Pentagon’s bloated budget (50% of world military spending when there are no enemy regular military forces left to fight.)

President Roosevelt launched mass social welfare schemes in the 1930’s similar to ones that Obama now proposes. Roosevelt’s New Deal may have staved off popular revolution, but it did not revive the economy. It took goading Japan into war to end the Depression. Let’s hope President Obama does not intend to follow this example in Afghanistan."
Posted by Tony at 5:05 AM