The Tunnels of Gaza 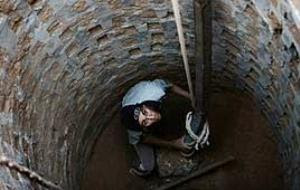 An underground economy and resistance symbol

"Resistance takes as many forms as life itself dictates.

Life in Gaza could not be more impossible. Its tunnels are a symbol of resistance.

Eighteen months ago, outraged when the Palestinians voted for the militant leadership of Hamas in democratic elections, Israel imposed a total lockdown on the entire population of Gaza.

But the entire people were determined to continue to resist. They found a way to circumvent total starvation.

The Israeli blockade led to a new economic structure, an underground economy. The besieged Palestinians have dug more than 1,000 tunnels under the totally sealed border.

The tunnels demonstrate the great ingenuity and enormous determination of the entire population and its leadership......."
Posted by Tony at 6:17 AM