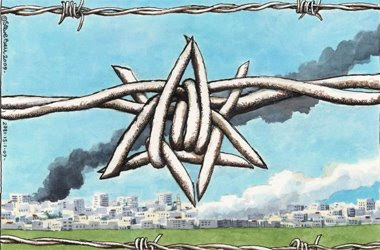 "Whenever Israel has an election, pundits begin the usual refrain that hopes for peace depend on the "peace camp" -- formerly represented by the Labor party, but now by Tzipi Livni's Kadima -- prevailing over the anti-peace right, led by the Likud.

This has never been true, and makes even less sense as Israeli parties begin coalition talks after Tuesday's election. Yes, the "peace camp" helped launch the "peace process," but it did much more to undermine the chances for a just settlement.....

Lieberman, who previously served as deputy prime minister, has a long history of racist and violent incitement. Prior to Israel's recent attack, for example, he demanded Israel subject Palestinians to the brutal and indiscriminate violence Russia used in Chechyna. He also called for Arab Knesset members who met with officials from Hamas to be executed......

The clearest message from Israel's election is that no Zionist party can solve Israel's basic conundrum and no negotiations will lead to a two-state solution. Israel could only be created as a "Jewish state" by the forced removal of the non-Jewish majority Palestinian population. As Palestinians once again become the majority in a country that has defied all attempts at partition, the only way to maintain Jewish control is through ever more brazen violence and repression of resistance (see Gaza). Whatever government emerges is certain to preside over more settlement-building, racial discrimination and escalating violence.

There are alternatives that have helped end what once seemed like equally intractable and bloody conflicts: a South African-style one-person one-vote democracy, or Northern Ireland-style power-sharing. Only under a democratic system according rights to all the people of the country will elections have the power to transform people's futures.

But Israel today is lurching into open fascism. It is utterly disingenuous to continue to pretend -- as so many do -- that its failed and criminal leaders hold the key to getting out of the morass. Instead of waiting for them to form a coalition, we must escalate the international civil society campaign of boycott, divestment and sanctions to force Israelis to choose a saner path."
Posted by Tony at 5:34 AM