Ramallah is now "The Green Zone" 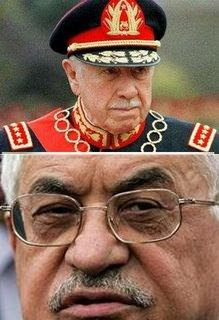 Mike Odetalla..."A seed in the eternal fruit of Palestine"

"Reports from family, friends, and other eyewitnesses are quite disheartening…Many now in Palestine speak of Ramallah as Palestine’s version of Iraq’s “Green Zone” and liken the situation faced by students trying to express their anger and frustration with what the Zionists are doing/done to the people of Gaza as the same in other despotic Arab countries and regimes, particularly that of Egypt!

Students at Bir Zeit University were severely beaten by masked PA security forces when they tried to demonstrate against the war crimes in Gaza. Students suffered many injuries including broken bones as the PA tried to snuff out any form of expression of sympathy amongst the general Palestinian population in Ramallah and other parts of the West Bank (many of you can now understand why the Israelis allowed the PA to send hundreds of its Egyptian/Jordanian trained security personnel to enter Hebron/Jenin/Nablus in the run-up to the Israeli invasion of Gaza)!

As Israel was starving and blockading the people of Gaza and during barbaric invasion of Gaza, the PA security wrote the sermons for the Friday prayers and warned the Imams from deviating from the scripts that were written for them AND as an added precaution, masked PA security personnel in full riot gear (supplied by the US and trained by the US in Egypt and Jordan) awaited the faithful as they existed Friday prayers, making sure that no one dared to demonstrate or express their anger to what was happening to their brothers and sisters in Gaza (Thank you Israel and America for teaching the PA about democracy and freedom of speech and expression. I guess those freedoms are reserved for Americans and Israelis only and do not apply to Palestinians)!

The PA goons who are doing the dirty work for their Israeli masters are out of work young men who, after six months of extensive training in Jordan or Egypt are sent into areas “foreign” to them (young men from Ramallah are sent to Nablus/Hebron, while those from Hebron/Nablus are sent to Ramallah and so forth so as to eliminate or minimize any chance that the people they are charged with abusing and or oppressing are recognized by them.....

A sad day has dawned on us indeed when one finds much more expressions of solidarity in the streets of Europe and the US than in the “Green Zone” of Palestine. This is precisely what the Zionists had wanted from the late Yasser Arafat when the late Israeli Prime Minister Rabin famously said that he didn’t want “a democracy in Palestine”, he said “we need a strong and ruthless dictator to lead the Palestinians”"
Posted by Tony at 8:26 AM