A Short History of the Israeli - Palestinian Conflict: Past Is Prologue 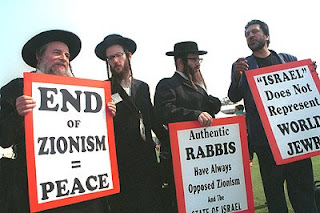 Zionism seeks "the restoration of tribalism in the guise of a modern, highly militaralized and aggressive state. (It) cut Jews off from (their) history and led to a fateful identity of interests with antisemitism (becoming) the only thing that united them. (It) fell into the ways of imperialist expansion and militarism, and showed signs of the fascist malignancy."

If you accept "the idea of a Jewish state," you mix its twin notions of "particularism (and) exceptionalism (that are) the actual bane of Judaism (and give) racism an objective, enduring, institutionalized and obdurate character." It turns Israel "into a machine for the manufacture of human rights abuses," and consider three of its former prime ministers. Menachem Begin (1977 - 83), Yitzhak Shamir (1983 - 84 and 1986 - 92), and Ariel Sharon (2001 - 06) were former terrorists who dispelled the illusion of Israeli democracy, morality, and respect for human rights. Kovel's conclusion: "the world would be a far better place without (the corrosive effects of) Zionism."

Credit Tel Aviv University scholar, Shlomo Zand, for his 2008 book: "When and How Was the Jewish People Invented?" Forget the myths most Jewish children are taught. Biblical nonsense comprising core Zionist beliefs about Jews:

-- expelled by the ancient Romans;

-- the exodus from Egypt;

-- enslaved, oppressed, and tormented for centuries; and

-- the notion that God bestowed a "Greater Israel" for Jews alone - the idea of "A land without people for a people without land."

Zand's view (shared by others) is that the Romans didn't expel whole nations, just small numbers from their conquered territories. Most Jews remained, converted to Islam when Arabs took over, and became progenitors of today's Palestinians.

According to Israeli journalist Tom Segev:

"There never was a Jewish people, only a Jewish religion, and the exile never happened - hence there was no return." So, if ancient Judaeans weren't expelled en masse, how were Jews scattered globally - the so-called Jewish Diaspora?......"
Posted by Tony at 5:32 AM