Van Spirits Away Protester in Egypt, Signaling Crackdown on Criticism Over Gaza 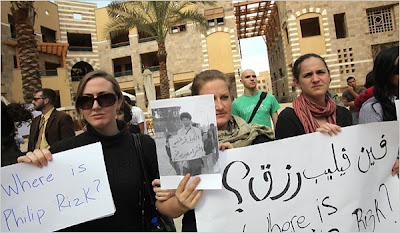 Students and faculty members of the American University in Cairo on Sunday protested the detention of a demonstrator.

"CAIRO — State security came for Philip Rizk on Friday night. He had just finished a six-mile protest walk with about 15 friends to raise support for Palestinians in the Gaza Strip when he was detained for hours and then hustled into an unmarked van and driven off. He has not been seen or heard from since......

Now, according to the accounts of five witnesses to Mr. Rizk’s arrest, and interviews with his parents, his sisters, human rights lawyers and some of his professors, it appears that the Egyptian authorities have turned to the country’s emergency law to silence criticism of its Gaza policy......

The government acknowledges holding about 1,800 prisoners without charge under the emergency law, but human rights groups say the number could be closer to 10,000. The law is routinely used against members of the Muslim Brotherhood, a banned but tolerated social and political movement. Dozens of Brotherhood followers have been arrested since the start of the Gaza conflict.

“Officially, nobody knows where Philip is,” said Hassiba Hadj Sahraoui, deputy director in the Middle East and North Africa for Amnesty International. “Philip has disappeared.”......"
Posted by Tony at 9:23 AM