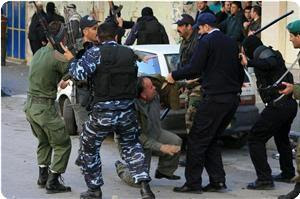 "RAMALLAH, (PIC)-- Mohammed Al-Haj, a Hamas's activist, died Sunday after Abbas's militias in the infamous Junaid prison tortured him to death, three days after he was arrested Thursday, local sources confirmed to the PIC.

According to the sources, Al-Haj, 30, was put under interrogation and severely tortured at the hands of elements of the ill-fated preventive security in the city, adding that the martyr is the brother of Hamas's spokesman in Jenin, who is now jailed in the Israeli Negev prison.

Killers of Al-Haj and their cohorts tried to deceive the Palestinian public by alleging that Al-Haj hanged himself, but inhabitants of Jenin didn’t buy those fabrications as anger spread all over the city over the heinous crime.

The family of Al-Haj confirmed that their son was arrested at the hands of the PA security elements last Thursday, and since then they knew nothing about him till they were told about his death.

Armed militias of Fatah faction and the unconstitutional PA government in Ramallah intensified arrest campaigns against Hamas cadres since the Hamas-led Palestinian resistance emerged victorious in the historic Gaza battle.

Human rights and legal organizations in the West Bank confirmed that the PA security apparatuses made 22000 political arrests since Hamas ousted elements of sabotage led by Fatah man Mohammed Dahalan in Gaza Strip in 2007.

At least 700 of those arrestees, most of them from Hamas Movement, were retained in Abbas's jails across the West Bank, many of them in solitary confinement and denied family visits.

On February 22, 2008, the PA security elements killed a Hamas prominent leader in Kobar village, north of Ramallah, Sheikh Majd Al-Barghouthi under torture. They attempted to cover up the crime by saying he died of heart attack, but medical examination and signs of torture on his body refuted the PA allegation...."
Posted by Tony at 4:05 AM