The war where I was killed and Gaza survived 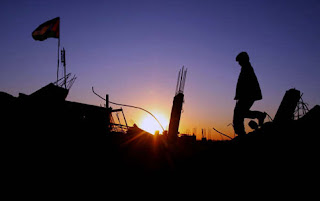 Eman Mohammed writing from the occupied Gaza Strip, Live from Palestine, 10 February 2009
(Eman Mohammed is a Jordanian-Palestinian freelance photojournalist and reporter based in the Gaza Strip since 2005.)

".....The silence in Gaza is too loud, too bare. Words don't seem to ease the pain or heal the wounds. The shouts are gone without an echo, but Gaza's people still managed to get up from under the rubble and the torn memories. My people proved to me once again that they are stronger than these attacks and invasions. They have vanquished death by rebuilding their lives time after time. Maybe that's something I'll never be able to understand or do myself, since the day they stabbed Gaza, my soul was stolen by an evil force. I believe it was a war on Gaza, not in Gaza as they claim. Their attacks were barbarism, but Gaza managed to survive, one way or another."
Posted by Tony at 5:53 AM