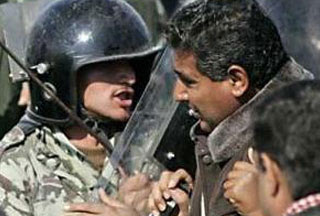 "A German-Egyptian student has been arrested during a pro-Palestinian rally in northern Cairo and is being held in a secret location.

Philip Rizk, a 26-year-old student in Cairo, was detained on Friday in Qalubia, north of Cairo, after holding a protest in solidarity with the Gaza Strip.

Eyewitnesses say he was bundled into a white car, with no license plates to an unknown destination. His family believes he is now being held by the Egyptian secret police.

A German Foreign Ministry spokesman, meanwhile, confirmed the incident, saying that the German Embassy in Cairo was looking into the case.

Egyptian authorities regularly arrest anti-government activists, holding many of them without charge in secret locations. Rights groups have accused authorities of torturing the detainees......"
Posted by Tony at 3:58 AM