Interview with Franklin Lamb: Self Defense or War Crime? (Part I) 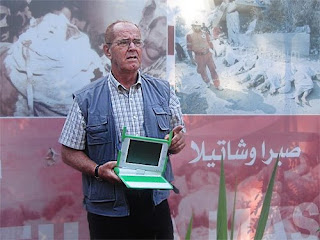 By Lawyers Without Borders
Palestine Chronicle

Part I: What Law Applies?

".....Faced with nearly unprecedented international outrage and condemnation, due to massive civilian casualties, the government of Israel continues to claim that its actions constituted self defense and that its attack on Gaza fully comply with the requirements of International law. To defend its actions, which it insists were “totally legal under international law” Israel has organized a bevy of international lawyers and ‘experts’ to support its claims, including Alan Derchowitz, Justus Reid Weiner, Avi Bell as well as others working from, or in cooperation with, Israeli government funded outlets such as the Jerusalem Center for Public Affairs or the Israeli Defense, Foreign Affairs and Information Ministries.

International Lawyers without Borders and Hokok, the International Coalition against Impunity, asked American international lawyer and researcher, Dr. Franklin Lamb, of the Sabra-Shatila Foundation, currently based in Beirut, to comment on Israeli claims. In the following interview Lamb offers his brief analysis of the conduct of Israel and Hamas, against a backdrop of continuing on-the-ground investigations in Gaza. Dr. Lamb was interviewed at UNESCO Palace in Beirut. A transcript follows......"