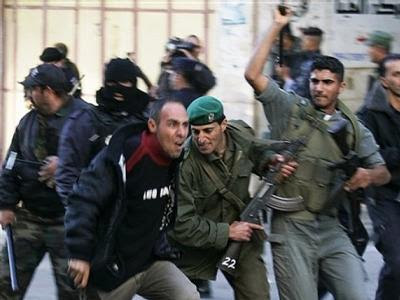 ".....Before the PLO began secret negotiations with Israel in Oslo in 1992, the old Fatah leadership refused to mobilize the PLO's various dispersed constituencies, in the words of the late Edward Said, "to attract its people's best talents." Already in 1993 Said wrote: "Central to the opposition's thought is the desperate need for internal reform within the PLO, which is now put on notice that noisy claims for 'national unity' are no longer an excuse for incompetence, corruption, autocracy." He added that "such opposition cannot, except by some preposterous and disingenuous logic, be equated with treason or betrayal" ("The lost liberation," The Guardian, 9 September 1993). Said had harsh words for Yasser Arafat, Abbas' predecessor.

"By signing an agreement with Israel to be Israel's collaborator in occupation," Said wrote, "[Arafat] left the PLO -- a body that did in face once represent Palestinian aspirations and, throughout the Third World, was seen as a peculiarly beleaguered but nevertheless authentic liberation organization, acknowledged as such by Nelson Mandela himself -- to dry up abroad" (Edward Said, Peace and its discontents (London: Vintage), p.167).

During Israel's recent massacres of Palestinians in Gaza, Palestinians in the West Bank who tried to demonstrate in solidarity with their sisters and brothers under siege faced a brutal crackdown by Abbas' security forces. The blatant use of the police for party political advantage and crushing opposition has fueled Palestinian anger and resentment and demonstrates clearly that the Fatah criticized by Said has changed only for the worse. Abbas' armed militias are funded and trained by Western governments and aided and abetted by Israel to play the role of the occupation's native enforcers. While the vast majority Palestinians no matter where they were felt outrage and wanted to express solidarity with Gaza, the Ramallah regime was obsessed with maintaining good relations with its foreign donors, which meant repressing its own people. Israel holds Abbas responsible for keeping the West Bank safe for prolonged military occupation and colonization, turning Abbas in the eyes of his people into a Palestinian Buthelezi (the Zulu leader who allied himself with the apartheid government of South Africa).

In the process of serving Israel, Abbas has lost all legitimacy and support among Palestinians -- except those whose loyalty is purchased with European Union-funded salaries. Abbas, instead of putting all his efforts into national reconciliation and PLO reform, visits Strasbourg, London, Paris and Rome and gives speeches to European parliamentarians and officials and receives more support from them than he does in Gaza, Nablus or any other place where Palestinians reside......."
Posted by Tony at 5:31 AM