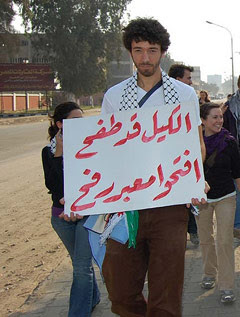 Per Bjorklund, The Electronic Intifada, 10 February 2009
(Per Bjorklund is a freelance journalist based in Cairo since 2006, covering social protest movements and dissent in Egypt as well as events in the region)

(Left) Philip Rizk marching in solidarity with Palestinians in Gaza and against the Egyptian government's closure of the Rafah crossing.

"Amidst a wave of repression against protests in support of Palestine, Egyptian security agents on 6 February arrested journalist and filmmaker Philip Rizk. Rizk, an Egyptian and German national, was detained after a peaceful march in solidarity with the people under siege and attack in the Gaza Strip. Days later his location is still unknown.

Fourteen activists from a number of countries, including Egypt, Spain, the US, UK and Germany all took part in the "March to Gaza," which was led through the Egyptian countryside on Friday with the aim of raising awareness about the ongoing siege on Gaza......

.....Rizk agreed to enter the station only on condition that he was accompanied by three human rights lawyers who had arrived from Cairo. At 11pm, state security agents from Cairo arrived and forced the lawyers to leave the interrogation room. Rizk was then smuggled out through a back door, and sped off in a microbus without license plates, almost running over Rizk's supporters who had gathered outside the police station and tried to stop the vehicle.

After more than 48 hours there was still no official response to questions about Rizk's whereabouts or the charges against him.....

During the Israeli war on Gaza tens of thousands of Egyptians took to the streets, condemning the military assault as well as the complicity of the Mubarak government in the blockade of the strip. Hundreds were arrested during the protests."
Posted by Tony at 5:42 AM