Military questions journalists over allegations of abuse by military police 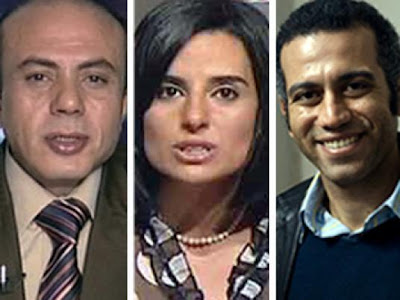 "Egypt’s military prosecutors questioned journalists and a blogger on Tuesday for allegedly criticizing the Supreme Council of the Armed Forces (SCAF), which has been ruling the country since the toppling of President Hosni Mubarak on 11 February.

A military source told Al-Masry Al-Youm that investigators didn’t “question” the three journalists, but rather inquired about claims that they have evidence showing the military police abused some protesters during the last three months.

Outside the investigation’s headquarters in eastern Cairo, tens of protesters expressed their anger on Tuesday at the SCAF and denounced what they believe to be plans by the military to restrict freedom of speech.

“The revolution will not fall back. No to suppression. Yes to freedom,” chanted the protesters.....

Media censorship by the SCAF has been the concern of many journalists and activists, especially since the revolution.

“This is not censorship, this is surveillance and it’s injustice,” said Amina Tharwat Abaza, a television host who resigned from state television last month protesting the biased coverage of protests.

“They want to send a message to the people that whoever opens his mouth with criticism will be punished.”"
Posted by Tony at 12:06 PM