These 'virginity tests' will spark Egypt's next revolution 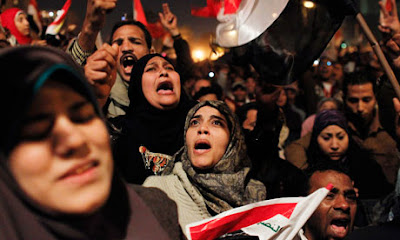 "....Lest we forget, we replaced Hosni Mubarak with a supreme council of Mubaraks – aka the supreme council of armed forces (SCAF) – a general who recently spoke to CNN kindly reminded us how the patriarch sounds. Speaking on condition of anonymity, he admitted that female activists detained during a Tahrir Square demonstration a month after Mubarak's overthrow had indeed been subjected to "virginity tests" – as the women have insisted all along. "The girls who were detained were not like your daughter or mine," the general said. "These were girls who had camped out in tents with male protesters in Tahrir Square, and we found in the tents Molotov cocktails and (drugs).".....

And with the virginity tests, here is SCAF retracing that thin line between sex and politics again, in the hope of shaming women away from demonstrating. The council has already replicated many of the other sins that had Mubarak facing the wrong end of a revolution: military trials for civilians, detentions and torture (by military police now, state security then), and an intolerance of critics.....

But it's different when the state/SCAF is the one forcing women's legs apart. A protest is planned for Saturday. It's a perfect time for gender to come out of the revolution's closet.

This must be our moment of reckoning with the god of virginity. The rage against the military must also target the humiliation brought by those tests, regardless of who carries them out.

So far, Egypt's Arab-language media has largely looked the other way. As Fatma Emam, a young revolutionary, told Bloomberg soon after Mubarak was forced to step down: "The revolution is not only taking place in Tahrir, it is taking place in every Egyptian house. It is the revolution of fighting the patriarch.""
Posted by Tony at 1:43 PM