Syria: Crimes Against Humanity in Daraa 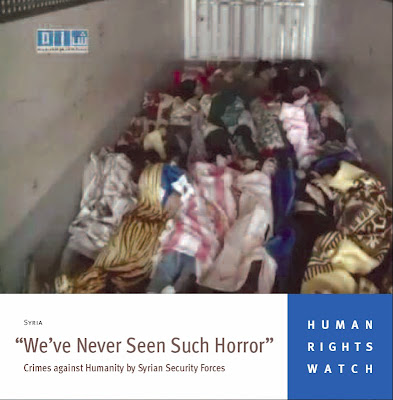 Killings, Torture in a Locked-Down City Under Siege

"(New York) - Systematic killings and torture by Syrian security forces in the city of Daraa since protests began there on March 18, 2011, strongly suggest that these qualify as crimes against humanity, Human Rights Watch said in a report released today.

The 57-page report, "‘We've Never Seen Such Horror': Crimes against Humanity in Daraa," is based on more than 50 interviews with victims and witnesses to abuses. The report focuses on violations in Daraa governorate, where some of the worst violence took place after protests seeking greater freedoms began in various parts of the country. The specifics went largely unreported due to the information blockade imposed by the Syrian authorities. Victims and witnesses interviewed by Human Rights Watch described systematic killings, beatings, torture using electroshock devices, and detention of people seeking medical care.

"For more than two months now, Syrian security forces have been killing and torturing their own people with complete impunity," said Sarah Leah Whitson, Middle East director at Human Rights Watch. "They need to stop - and if they don't, it is the Security Council's responsibility to make sure that the people responsible face justice."

The Syrian government should take immediate steps to halt the excessive use of lethal force by security forces, Human Rights Watch said. The United Nations Security Council should impose sanctions and press Syria for accountability and, if it doesn't respond adequately, refer Syria to the International Criminal Court.

The protests first broke out in Daraa in response to the detention and torture of 15 children accused of painting graffiti slogans calling for the government's downfall. In response and since then, security forces have repeatedly and systematically opened fire on overwhelmingly peaceful demonstrators. The security forces have killed at least 418 people in the Daraa governorate alone, and more than 887 across Syria, according to local activists who have been maintaining a list of those killed. Exact numbers are impossible to verify.

Witnesses from Daraa interviewed by Human Rights Watch provided consistent accounts of security forces using lethal force against protesters and bystanders, in most cases without advance warning or any effort to disperse the protesters by nonviolent means....."