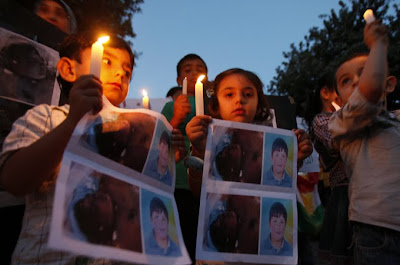 Activists say 34 people killed in the city of Hama during one of the largest anti-government protests in the uprising.

"Syrian security forces have opened fire on one of the largest anti-government protests in the 10-week uprising so far, leaving at least 34 people dead in the central city of Hama, activists said.

The Syrian Observatory for Human Rights said the victims were killed on Friday as security forces dispersed a rally of more than 50,000 people in a city where thousands died in a failed 1982 revolt against the government.

The deaths came as president Bashar al-Assad's forces renewed their assault on towns seen as key to the demonstrations calling for an end to his family's 40-year rule.

Rami Abdul-Rahman, director of the Syrian Observatory for Human Rights, said the Hama protest was among the largest yet in the uprising that began in mid-March. He said security forces also shot dead one person in the village of Has in the northern province of Idlib........

The opposition had called for Friday's nationwide rallies to commemorate the nearly 30 children killed during the uprising.

In the southern city of Deraa, where the uprising began 10 weeks ago, scores of people rallied in the city's old quarter, chanting "No dialogue with the killers of children," an activist said.

The protesters were referring to a decree by Assad to set up a committee tasked with leading a national dialogue.

The call for protests came after a video surfaced earlier this week on YouTube, Facebook and websites featuring Hamza al-Khatib, a 13-year-old boy whose tortured and mutilated body was returned to his family weeks after he disappeared during the protests.

The boy has since become a symbol to Syria's uprising and many people carried his posters during anti-regime rallies this week."
Posted by Tony at 9:13 AM