The unbearable lightness of killing 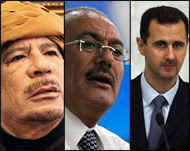 Earth to Gaddafi and Saleh: Your time is up, stop murdering your people.

"Ali Abdullah Saleh and Muammar Gaddafi have (long) forfeited their right to the title of president and should no longer be referred to as such.

Presidents and leaders are meant to defend their people against all aggression - internal and external. Their role at the helm of the state is to protect their society and insure its wellbeing.

If the discrepancy between assumed protection and practiced oppression wasn't already clear to the international community over the last three or four decades, the two leaders are providing the necessary proof of where they stand every day.

Unleashing the heaviest military arsenal possible against their own people, mostly indiscriminately, has earned them the title of war criminals, not presidents. The use of rape as a terrorising, military means against families in the likes of Misurata goes far beyond pure criminality. It's cold-blooded inhumanity.....

President Zuma and other African leaders are missing the point. Arabs and Africans no longer accept the classic ultimatum: oppressive dictators or interventionist Westerners. That's the whole point of the 'Arab Spring'.

Its motives, and overarching goal, are based on the simple idea that human rights are universal.

It is no longer acceptable for Westerners to speak of human rights in Eastern Europe or wherever is convenient or expedient, while denying them in the Middle East. Or for Arab leaders to speak in support of Palestinian rights under occupation while at the same time acting against the rights of Palestinian and Arab people everywhere else. Indeed, as the new Egyptian government lifts the blockade of Gaza, these rights are shown to be compatible and reinforcing in reality.

The same goes for African nations.

In order for Western intervention to be put in check and for Libya, Yemen and Syria to become free societies, it's incumbent upon the likes of South African and Western leaders to stand firm in favour of change, democracy and human rights everywhere in theory and practice.

Arguing that national interest doesn't necessarily coincide with humane foreign policy is false, unless it's meant to camouflage the short term interests of "special interests'', such as oil and arms companies, as a "national interest".

And for now, to do everything possible to stop dictators from turning their cities into senseless killing fields.

That's why it needs to be made clear to leaders like Gaddafi and Saleh that they enjoy no support from anyone and that there is absolutely no future for them in the leadership of their countries. Period."
Posted by Tony at 1:17 PM