The secret life of Arabia

"What lurks in the shadows as the Arab Spring turns into the Arab Summer tells us more about what's to come. Qatar is maneuvering its soft power towards Syria, where the repression machine has turned its guns on youths and the urban bourgeoisie has yet to make a move. Egypt may boil over too as the Saudis turn up the heat, the Wahhabi way....

As far as Washington and selected European capitals are concerned, "stability" prevails; as in Israel and Saudi Arabia, as pillars, now that Egypt has wobbled; and the oil-drenched Gulf Counter-Revolutionary Club, also known as Gulf Cooperation

Council (GCC), is solid as Himalayan rock. No revisionism allowed. "Democracy", yes - as long as it is not a threat to "Western interests".

And yet what lurks in the shadows tells us more about what's to come. Call it the secret life of Arabia.....

And this while the number of Syrians killed by President Bashar al-Assad's repression machine has now surpassed the number of Egyptians killed by Hosni Mubarak's repression machine. By the body count law that draws the difference between "rogue" regimes and "our" bastards, Assad should be ready for the guillotine. The problem is the Anglo-French-American consortium has not found an "acceptable" alternative to Assad (there isn't any); thus the bland sanctions, and the benefit of the doubt..... 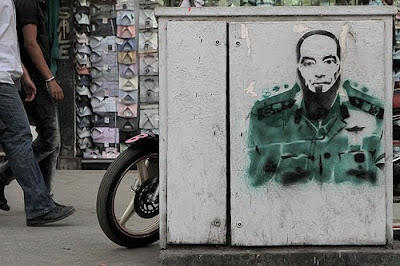 The House of Saud has its hands full with Egypt as well - now that the Egyptian Military Council has been handed a cool $4 billion by Riyadh. It's enlightening to know that Field Marshall Tantawi - the current, "transitional" strongman in Cairo - was the Egyptian Defense Attache in Pakistan during the Afghan jihad of the 1980s.
So Tantawi is an ISI darling, as well as a Saudi Prince Bandar darling. With Tantawi as a House of Saud Trojan Horse, his bet for Egypt is much more Muslim Brotherhood than secular Tahrir Square.

That happens to square off beautifully with Washington's own (not so secret) burning desire: a Pakistani model for Egypt, with the army in the background and a facade civilian government run by Islamic parties who won in the ballot box. But this mildly Islamic regime would only be acceptable if it were to kowtow to neo-liberalism and the Camp David accords with Israel.

The House of Saud subscribes to this project for a very simple reason. The House of Saud knows its supposed hegemony in the Arab world only holds as long as Egypt is kept politically insignificant. And the way to accomplish this is via an islamicization - the Wahhabi way - of the state and politics as a whole. Tahrir Square, hopefully, will fight it to death. At least there may be a few reasons to expect not such a bleak, upcoming Arab Summer."
Posted by Tony at 3:20 AM