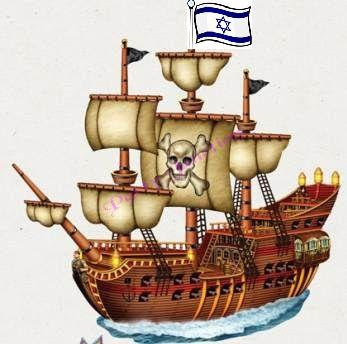 Humanitarian ships to sail to Gaza again, despite current UN disapproval and a previous attempt that turned deadly.

"It is expected that at the end of June, Freedom Flotilla 2 will set sail for Gaza, carrying various forms of humanitarian aid, including medical, school, and construction materials. This second flotilla will consist of 15 ships - including the Mavi Marmara from the first flotilla - sailing from Istanbul, but also vessels departing from several European countries, and carrying as many as 1,500 humanitarian activists as passengers. If these plans are carried out, as seems likely, it means that the second flotilla is about double the size of the first that was so violently intercepted by Israeli commandos in international waters on May 31, 2010, resulting in nine deaths on the Turkish lead ship......

As the Greek coordinator of Freedom Flotilla 2, Vangelis Pisias has expressed the motivation of this new effort to break the blockade: "We will not allow Israel to set up open prisons and concentration camps." Connecting this Gazan ordeal to the wider regional struggles, Pisias added, "Palestine is in our heart and could be the symbol of a new era in the region.".....

In light of these surrounding circumstances, including the failure of Israel to live up to its announced promise after the attack in 2010 to lift the blockade, it shocks our moral and legal sensibilities that the UN Secretary General should be using the authority of his office to persuade member governments to do their best to prevent ships from joining Freedom Flotilla 2. Ban Ki-moon shamelessly does not even balance such a call, purportedly to prevent the recurrence of violence, by at least sending an equivalent message to Israel insisting that the blockade end and that no force be used in relation to humanitarian initiatives of the sort being planned.

Instead of protecting those who would act on behalf of unlawful Palestinian victimisation, the UN Secretary General disgraces the office by taking a one-sided stand in support of one of the most flagrant and long lasting instances of injustice that has been allowed to persist in the world. True, his spokesperson tries to soften the impact of such a message by vacuously stating that "the situation in the Gaza Strip must be changed, and Israel must conduct real measures to end the siege." We must ask why were these thoughts not express by the Secretary General himself and directly to Israel? Public relations is part of his job, but it is not a cover for crassly taking the wrong side in the controversy over whether or not Freedom Flotilla 2 is a legitimate humanitarian initiative freely undertaken by civil society without the slightest credible threat to Israeli security.

Appropriately, and not unexpectedly, the Turkish Government refuses to bow to such abusive pressures even when backed by the UN at its highest level......

.....Liberating Palestine from occupation and refugee regimes should be a core, unifying priority of this second stage of the Arab Spring. Nothing could do more to manifest the external as well as the internal turn to democracy, constitutional governance, and human rights than displays of solidarity by new and newly reformist leaders in Arab countries with this unendurably long Palestinian struggle for justice and sustainable peace. It would also offer the world a contrast with the subservience to Israel recently on display in Washington, highlighted by inviting Binyamin Netanyahu to address an adoring US Congress, a rarity in the country's treatment of foreign leaders paralleling the pandering speech given by president Obama to AIPAC....."
Posted by Tony at 3:00 AM