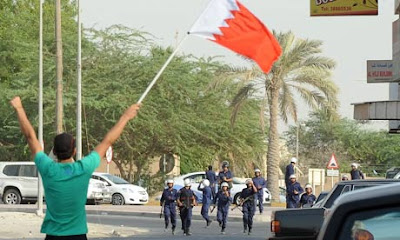 "Clashes between demonstrators and security forces have again broken out in Bahrain on the day martial law was lifted by a ruling monarchy battling to restore its image.

Today's demonstrations were quickly scattered (See video posted below) by the same means used to douse protests earlier in the year. Security forces moved into Shia neighbourhoods where people had taken to the streets and dispersed them with tear gas and bird shot. Human rights activists said those wounded were too scared to go to hospital and instead treated their injuries at home.....

"The regime played the sectarian card very early," said one western observer. "And they created a monster that they couldn't control."

Dozens of doctors and nurses were arrested during the security crackdown ordered in mid-March after a failed attempt by Bahrain's crown prince to broker discussions with the main opposition group, al-Wafaq.

The fate of many of them remains unknown. The government accused medical staff of using one of Manama's main hospitals, the SMC medical centre, of using the site for political activities and blockaded the hospital with the help of Saudi forces and troops from the gulf states, who had been invited into Bahrain to help quell the dissent....."
Posted by Tony at 1:59 PM