"Violence broke out on Friday afternoon between citizens and police officers from Azbakeya police station.

The fight started after a driver detained at the station died. Colleagues and relatives of Mohamed Saeed, 40, accused the police of torturing him to death.

The Ministry of Interior denied this, saying locals beat the driver after he assaulted the head of the police station. It added that he died at the Demerdash Hospital.

Eyewitnesses said they saw stones and Molotov cocktails being thrown near the station. Central security forces used tear gas to disperse the protesters, who torched a central security truck. Some protesters claimed the police brought in thugs to attack them.

Disturbances initially erupted when officers from the police station detained eight drivers in Ramses Square for obstructing traffic. When fellow drivers learned of Saeed's death after an alleged beating, they attempted to break into the station. Police responded by firing shots into the air to disperse them.

Walid Mahmoud, a driver, claimed the police beat the arrested drivers with sticks, injuring some of them. "One hour later Saeed died, even though he was able-bodied," he said....."

Also, See This From Hossam El-Hamalawy: 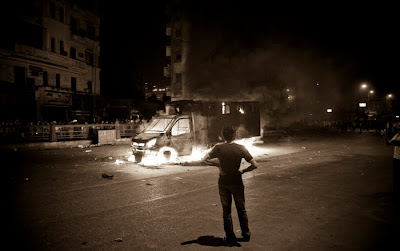 Rage against the Police
Posted by Tony at 8:07 AM