The Despot is Down and Out! Saleh 'to seek medical care in Saudi Arabia' 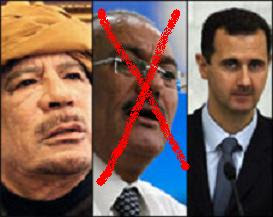 Reports say Yemen's president has accepted offer to receive treatment in the kingdom after attack on his Sanaa compound.

"Ali Abdullah Saleh, the Yemeni president, has reportedly accepted an offer from Saudi Arabia's King Abdullah to travel to the kingdom for medical treatment.

There were conflicting reports of Saleh's whereabouts, with sources telling Al Jazeera that the president was being treated at a hospital in Sanaa and that a Saudi aircraft was ready to take him to Saudi Arabia if needed.

Saudi sources earlier said Saleh had arrived in the country on Saturday evening, a day after he suffered injuries in an attack on his palace compound in the Yemeni capital, Sanaa.

Meanwhile, Reuters news agency quoted a Saudi official as saying Saleh was on his way to Saudi Arabia.

"He's on his way. He'll be arriving tonight. He's coming for medical treatment. We are the closest country and we have the capabilities," the official, who asked not to be named, said.

When asked whether Saleh was stepping down from power, he said: "He's coming for medical treatment."[The Kingdom of Horrors can Keep Him, with Bin Ali!]....."
Posted by Tony at 1:01 PM