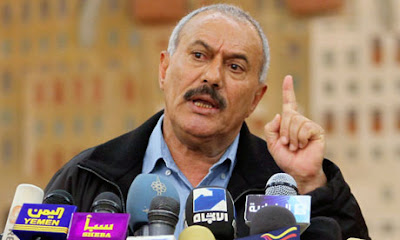 Confusion reigns in Yemen over President Saleh's injuries. Whatever the truth, the country is facing a decisive moment

"I started this morning planning to write a general blog post about Yemen, but events took a dramatic turn this afternoon – and are still developing. Let's start with the official version. The presidential palace in Yemen was hit by shells on Friday. Government sources said at first that President Saleh was unhurt and would be giving a news conference within an hour.

The news conference didn't happen and the new line seems to be that the president has been slightly injured and is now in hospital.

At present, there is no way of knowing if this is true. Being taken to hospital could explain why Saleh hasn't given the promised news conference. So would being killed. We can't be absolutely sure that Saleh is still alive until he is seen on television talking about what happened.

If he were dead, Yemeni officials wouldn't necessarily say so until the resulting power vacuum had been filled. Similarly, if his injuries were serious, officials might still be expected to describe them as slight....."
Posted by Tony at 9:52 AM