The Determination of the Arab Revolutions 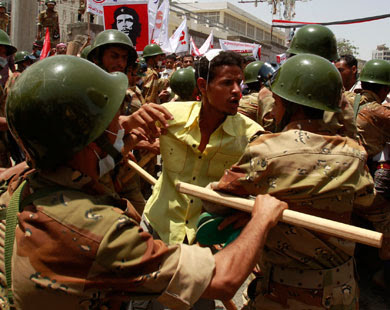 Autumn of the Autocrats?

"After the relatively swift triumphs of the Tunisian and Egyptian revolutions in deposing their dictators earlier this year, other Arab dictators drew a different set of lessons than their populations did.

Fed up with decades of repression, corruption, and the break down of state institutions, as well as the complete loss of faith in any meaningful political or social reforms in their societies, people across the Arab world this spring have waged simultaneous mass movements to force sweeping changes.

Arab autocrats, sustained for decades by the powerful security state, were shocked and startled as they observed in horror the dismantling of the security apparatuses in Tunisia and Egypt, facing fearless populace willing to sacrifice their lives to liberate themselves from the yoke of tyranny and regain their freedoms and dignity....

However, the authoritarian regimes drew different lessons from the Tunisian and Egyptian experience. They did not see the power and determination of the people but the weakness of the regimes and fragility and indecisiveness of its leaders.

In each case, though engulfed in its own particular circumstances and distinct features, the overall framework of how each regime dealt with its own popular uprising is strikingly similar.....

Ultimately, the main strategy of each regime is to regain the initiative from the streets so they continue to use these different tactics in order to split the opposition or wear down the people. Endless promises, delay tactics, and old style propaganda techniques and maneuvers are utilized. President Saleh employed his infamous delaying schemes to wear down the opposition, thus promising to step down five different times as a result of the Gulf Cooperation Council initiative, only to renege each time. Eventually, the GCC itself completely abandoned its own initiative. The Syrian president officially lifted the state of emergency. Yet since then, over 1200 people have lost their lives and over 12,000 have been detained without trial. Electricity as well as water and phone lines were cut off from some cities that were under siege by the military for many days.

....In essence, the dictators and their cronies are fighting, not just to stay in power, but also to literally escape punishment for their crimes. But perhaps the most brutal and effective tactic to derail any peaceful revolution is to drag the country into civil war.

Regional players such as Israel and the Saudi ruling family, as well as other international players are very nervous about the popular discontent and the changes sweeping the region.....

People in the Arab world are instead determined to rely on themselves with an uncompromising will to continue their just struggle for freedom and dignity echoing the voice of another young leader in the Latin American jungles many decades ago, as Che Guevara reminded his comrades “Until victory always” but “better to die standing, than to live on your knees.” "
Posted by Tony at 12:45 PM