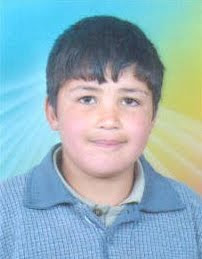 Shiv Malik, Ian Black and Nidaa Hassan (a pseudonym for a journalist in Syria)
guardian.co.uk, Tuesday 31 May 2011

"The new face of the Syrian revolution is chubby, has a winning smile and belongs to a 13-year-old named Hamza al-Khatib.

The boy, from a village called al-Jizah near the southern city of Deraa, has become the most famous victim yet of Syria's bloody chapter of the Arab spring.

Hamza was picked up by security forces on 29 April. On 27 May his badly mutilated corpse was released to his horrified family, who were warned to keep silent.

According to a YouTube video and human rights activists, Hamza was tortured and his swollen body showed bullet wounds on his arms, black eyes, cuts, marks consistent with electric shock devices, bruises and whip marks. His neck had been broken and his penis cut off.....

"This is a message from the state to all protesters," said a human rights expert who runs the Monitoring Protests Facebook page which focuses on abuses during the protests. "They are trying to say, 'We don't spare anyone and if you continue protesting this what we are going to do to you and your kids.' "

The Local Co-ordinating Committees of Syria, the best-organised grassrootsopposition network, said at least 25 children under 18 had been killed since mid-March.

The death toll includes a seven-year-old girl, Majd Ibrahim Airfaee, from Deraa, who was shot in the abdomen on 26 April, and Tamam Hamza Al-Saidawi, aged five, from Homs, who was shot dead in the car he was travelling in with his family in a case that has incensed the city.

Rime Allaf, an associate fellow at the London thinktank Chatham House, said the Syrian government's decision to broadcast a response demonstrated it was aware of how deeply Hamza's case has angered Syrians.

"Even people who have previously not taken sides, or who have been leaning towards the regime, have found this intolerable," she said."
Posted by Tony at 1:42 PM