Yemen crisis deepens as dozens are killed in street battles 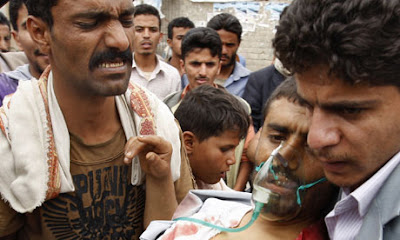 "The crisis engulfing Yemen deepened on Wednesday with dozens of people killed as President Ali Abdullah Saleh reinforced his troops after heavy clashes with gunmen loyal to an influential tribal leader.

Arab embassies were said to be evacuating their staff and the few remaining western residents were being advised to leave urgently. The Foreign Office is urging all Britons to leave while flights are still available in a situation diplomats described as "worse than Libya.".....

"Even if Saleh can defeat all those challenging him, his ability to 'govern' the country in any coherent sense of the word is gone forever," said the Yemeni political analyst, Abdul Ghani Iryani.

"Even in the most autocratic regimes, governance relies on some degree of acceptance of authority. In Yemen there is no sign whatsoever that this exists. Either Saleh leaves power through a political deal he brokers from a position of weakness or he is ousted by force by breakaway military groups and tribal leaders.""
Posted by Tony at 2:11 PM