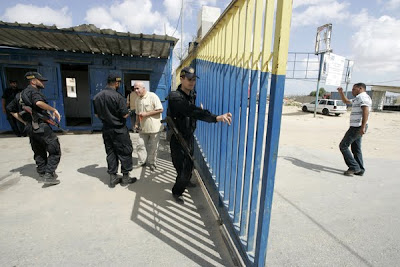 "Palestinian travellers say dozens of angry Gazans attempted to storm a crossing at the Egyptian border but were pushed back.

The commotion came just a week after Egypt permanently reopened the crossing and lifted travel restrictions on the Gaza Strip.

Several travelers at the Rafah crossing say about 200 people waited to cross into Egypt today but were denied entry.

Dozens then pushed up against a terminal fence, until Hamas forces cordoned off the area. The witnesses spoke on condition of anonymity, fearing for their own safe passage.

It wasn't immediately clear why the Gazans were prevented from crossing into Egypt.
Gaza's Hamas rulers have complained that despite Egypt's ending of its four-year blockade, there are still limitations on Palestinian travel. "
Posted by Tony at 4:51 AM