Alice Walker: Why I'm joining the Freedom Flotilla to Gaza 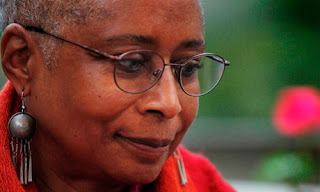 Pulitzer prize-winning American writer Alice Walker is on board an international flotilla of boats sailing to Gaza to challenge the Israeli blockade. Here she tells why

"....Our boat, The Audacity of Hope, will be carrying letters to the people of Gaza. Letters expressing solidarity and love. That is all its cargo will consist of. If the Israeli military attacks us, it will be as if they attacked the mailman. This should go down hilariously in the annals of history. But if they insist on attacking us, wounding us, even murdering us, as they did some of the activists in the last flotilla, Freedom Flotilla I, what is to be done?

There is a scene in the movie Gandhi that is very moving to me: it is when the unarmed Indian protesters line up to confront the armed forces of the British Empire. The soldiers beat them unmercifully, but the Indians, their broken and dead lifted tenderly out of the fray, keep coming.....

And what of the children of Palestine, who were ignored in our president's latest speech on Israel and Palestine, and whose impoverished, terrorised, segregated existence was mocked by the standing ovations recently given in the US Congress to the prime minister of Israel?

I see children, all children, as humanity's most precious resource, because it will be to them that the care of the planet will always be left. One child must never be set above another, even in casual conversation, not to mention in speeches that circle the globe.....

It is justice and respect that I want the world to dust off and put – without delay, and with tenderness – back on the head of the Palestinian child. It will be imperfect justice and respect because the injustice and disrespect have been so severe. But I believe we are right to try.