Revolution in Their Eyes 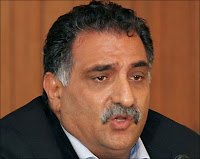 "Palestinian intellectual and ex-Knesset member Azmi Bishara followed Egypt's 25 January Revolution minute by minute from the Qatari capital Doha where his think tank -- the Arab Centre for Research and Policy Study -- is based.

"It was crucial for me," he told his audience at Cairo University's Faculty of Political Science Tuesday morning. He emerged as crucial for the revolution too -- at least in the eyes of many Egyptians who found in Bishara, 54, an ideologue of sorts during the uprising.

Four months after Hosni Mubarak's ouster, Bishara who was banned from entering Egypt after criticising Cairo's stand during Israel's war on Gaza in December 2008, ventured to visit the new Egypt. His name was still on the traveller's blacklist when he arrived at Cairo Airport Monday. The intelligence official who put his name on the list was the very same person who removed it upon his arrival. This was Bishara's first direct experience with the new Egypt: he is no longer banned, but the powers that be that deemed him unwelcome earlier haven't changed. It says a lot about the revolution that Bishara came to talk about....

But what are the tools for change, he asked? "The regime remains the regime and the revolutionaries continue to plan the next Friday demonstration." Despite his admiration of the revolution, Bishara voiced concern over the flood of foreign aid pouring into Egypt for "development".

Moving forward can't be done with the help of foreign aid, he said, alluding to the $3 billion loan the IMF extended to Egypt earlier this month. "They don't help you, they hamper and handicap your economic and social development." Egypt has to make a choice, he said.

On elections, Bishara said there should be consensus first on a number of principles to safeguard democracy, "which isn't about the rule of the majority... it's about a majority ruling under the principles of democracy." Furthermore, he added, there's "no democracy" without an independent judiciary, separation of the state's branches of power, and an elected legislature....."
Posted by Tony at 7:17 AM