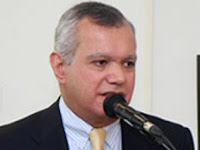 "The appointment of Mohamed El-Orabi as Egypt’s new foreign minister represents the continuation of the former regime’s policies in both the domestic political landscape and the international one, experts say.

Furthermore, diplomats at the Ministry of Foreign Affairs say that Orabi was one of the closest ambassadors to the family of ousted President Hosni Mubarak.

“The choice of El-Orabi shows that the country’s military rulers and the cabinet are adopting the wrong strategies in shaping the foreign policy of Egypt. El-Orabi is not a figure who represents Egypt’s interests after the revolution,” said Abdullah al-Ashaal, an ex-diplomat and a presidential hopeful.

Orabi has been a career diplomat for almost 35 years. He served as the deputy ambassador to Israel from 1994 to 1998, and has worked in the United States and Britain. He was Egypt’s ambassador to Germany for eight years, from 2001 to 2008.