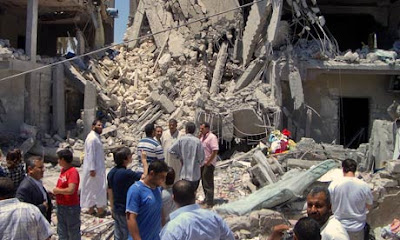 "....The French press lapped up such allusions, looking forward to a brutal but swift military adventure that would topple a tyrant and stop him "killing his own people". Sarkozy, meanwhile, could make up for his appalling domestic record with an honorable crusade against a one-time ally.

How strangely silent the same French press is today as speculation mounts that it was in fact one of their missiles that ploughed into a housing block in Tripoli, killing at least nine civilians, including young children, and seriously injuring dozens more. While authoritative journalists, including British ones, working in Libya point to the "weapons systems failure" (Nato jargon) being the fault of the French military, Paris has effectively imposed a news blackout on the subject. The day after the lethal attack, there was not one word in the French press, on TV, or on radio about those potentially responsible.

"It doesn't matter whose missile it was," a source at the French Ministry of Defence told me. "It's a combined operation – we're all in it together." Asked directly if a French missile had killed the civilians, he replied: "No comment."...."
Posted by Tony at 3:35 AM