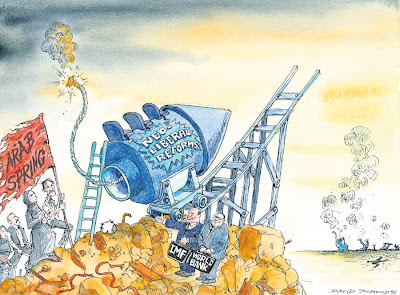 "Watching the joyfully chaotic events of the Arab spring unfold in Egypt and Tunisia was heart-warming for anyone who likes to see kleptocratic dictators getting their comeuppance. What was far less clear was what the many thousands of campaigners who spilled out into the streets and squares of Tunis and Cairo wanted to build in place of the autocracies they had endured for decades.

Campaigners on the ground are becoming increasingly worried that even before voters in Egypt and Tunisia have had the chance to express their will through long-awaited free elections, the world's great economic powers are stepping in with their own blueprint for north Africa's future.

Leaders at the G8 summit in Deauville last month offered a Marshall Plan-style package of aid for the region. It sounds great: what western taxpayer wouldn't want to help those brave revolutionaries and their families? But civil society groups in the Arab countries are rightly wondering whether they should think twice about the priorities of donors who until recently were happy to support the regimes that have been overthrown – and haven't cancelled Egypt's £18.5bn of debt, much of it run up by Hosni Mubarak.....

The IMF and World Bank have been working in both Egypt and Tunisia for some time, but some analysts argue that their development model of opening up to foreign investment, cutting back food and fuel subsidies and focusing on exports instead of building sustainable domestic markets actually helped to create the inequality and concentration of power that eventually sparked the uprisings.

After the crisis that has lashed the world economy over the past four years and is still battering the eurozone, it must be time for the economic powers of the old world to show a bit of humility, stop peddling tired old ideals – and wait to see what Egyptians and Tunisians want for themselves......"
Posted by Tony at 3:53 AM