My husband was abducted by Bahrain 'security' 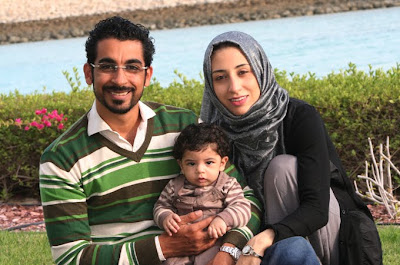 One woman's personal ordeal describes how her husband was jailed following a military trial.

"For the first time in its history, Bahrain has embarked on mass military trials of hundreds of civilians on fatuous charges of crimes against the state. While more than 1,000 remain in detention, the opposition estimates that 400 are going through the process of military trials and 100 have been convicted so far. The swift summary justice churned out in these tribunals are a throwback to early 20th century Stalin show trials, designed to punish and humiliate dissenters. One of those being tried is my husband, Ghazi Farhan. On June 21, he was sentenced to three years imprisonment.

Having been born and educated in the UK, I moved to Bahrain in 2009 to marry Ghazi Farhan, a 31-year-old energetic businessman, leaving a respectable job in Cambridge to start a new family life in the land of my ancestors. Little did I imagine that in 2011, when the Arab Spring hit the shores of this island, it would be swiftly nipped in the bud, and would sweep my blossoming family along with it......"
Posted by Tony at 8:13 PM