ANALYSIS-Egypt army may pull strings from barracks in future 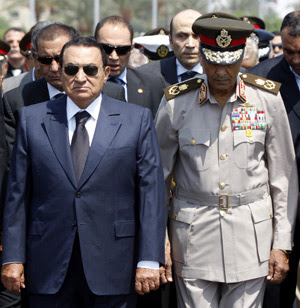 "CAIRO, June 22 (Reuters) - Hossam el-Hamalawy is used to being in trouble with the authorities. State security hauled him in three times for his activism when Hosni Mubarak was in power. He hoped Egypt's uprising would end such summonses. It didn't.

He was called in again in May for questioning. But one element changed. It wasn't internal security but an army general who wanted to question the blogger over accusations he made on television about abuses by the military police.

"We didn't have this revolution ... so that we would replace Hosni Mubarak with the military as a taboo," said Hamalawy, insisting that the army must change its ways.
"The military institution is part of the old regime," he said. "It will have to go through its own change in revolutionary Egypt."....

"The Egyptian military is the institution that can hold the country together, move it forward. It is the only one," said Kamran Bokhari, an analyst at global intelligence firm STRATFOR.

"I don't see it relinquishing power to a very nascent, parliamentary system in which there is also a president."

He added: "There are material interests as an institution. Their privileged status, they want to be able to retain that....

To achieve this, there are several models for Egypt to copy.

Close to home is Turkey, where the army was guardian of the secular constitution for decades and toppled governments when it saw that threatened....Further afield is Pakistan ...."
Posted by Tony at 4:00 PM