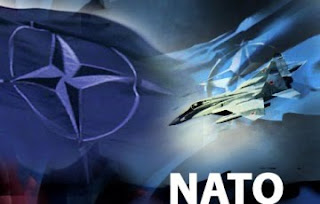 "As a global Robocop, the North Atlantic Treaty Organization is on a roll. From southeastern Europe to the eastern Mediterranean, and from the Persian Gulf to South and Central Asia, the Pentagon-led war machine is taking military establishments under its wing. All very well, unless you happen to be a civilian destined for humanitarian liberation, NATO-style...."
Posted by Tony at 4:01 AM