Is violence now the only way to change Syria? 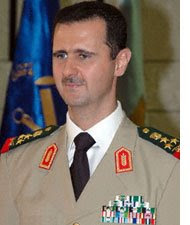 "....But it is in Syria where the fight between popular protest and brute force has become most clearly and bloodily drawn. Syria is not like Tunisia or Egypt. The security apparatus of the ruling Alawite regime is far bigger – as many as a million some say. It has learnt the lesson of Cairo and Tunis in stopping any mass concentration of protesters in central squares. And it has no compunction about killing its own people.

It is far too late now to witter on, as Foreign Office ministers do, about President Bashar al-Assad having the choice of reform or isolation. More and more he appears the pathetic creature of a family and clan determined to hold on to power whatever. He speaks the words, his brother and brother-in-law send in the tanks and the snipers.

What is so ennobling about the Syrians is that still they go on protesting, each Friday, on many nights and in many places. Will they succeed in gradually wearing down the regime and encouraging a steady peeling away of its support? Can they succeed without resorting to the weapons and violence that Assad has so grotesquely accused them of? No-one knows.

It is almost impossible to put into words one's admiration for the courage these Syrians have shown in their protests. For their persistent, obstinate revolt is where the Arab Spring is now at. We all have a vested interest in seeing them succeed. Because, if they don't, then Aung San Suu Kyi and every other proponent of peaceful democratic campaigning must face the question: can brutal oppression ever be overthrown except by violent and organised revolution?"
Posted by Tony at 3:09 AM